In this very important writing, I would like to share about the laying of hands on the child as a means of imparting spiritual gifts and power to the child. The transfer of gifts from One Human being to another, and particularly your baby is a scriptural principle and was practiced by Moses the Apostle, Christ, the Apostles and other persons in bible times.

How are the gifts transferred to your child?

The conveying of gifts is done when a person in the ministry of Christ lays hands on the child and prophesies over and blesses that child. This was seen in Jesus’ example in Matthew 19: 13, in the book of Timothy and even by Prophet Samuel who laid hands on the young David. Let us look first at Jesus’ example which is documented in Matthew 19: 14, Mark 10: 14 and Luke 18: 16.

Why did the parents bring the children for the laying on of hands?

First of all, this was one method that Jesus used in His ministry for the healing of the sick, as we find out in scriptures. However, there is no evidence that these children were sick, as in the case of the nobleman’s son and Jairus’ daughter. These parents wanted Jesus to pray over and bless their children as Mark 10: 16 beautifully says in the words “He took them up in his arms, put his hands upon them, and blessed them.”

Luke 18: 15 said that these children were “infants”, which in modern times refers to children from one to twelve months, a very precious time indeed. The scriptures show that Jesus loved children of all ages, like the little lad who gave his meal, the 12 year old daughter of Jarius, the rich young ruler to name a few. This tells us that true believers in Him would cherish and love children and infants and never harm them.

I want you to examine the attitude of the disciples which showed that they did not value the role of children in Jesus’ ministry. The disciples treated the children like liabilities. This raises the question as to how we perceive the children in our families, churches and schools. The Lord revealed to me on 20th May 2007 that children are the untapped potential in the church.

Having grown up in the church (I was born in the church in a sense), I know for sure about the importance of having the Lord lay His hands on a child. If you miss that opportunity when the child is tender and receptive to the Lord as a child, it may never come again. I myself have personal experience with that. That is why we must not keep children out of the kingdom by telling them they are too young for baptism, too young for communion and other things pertaining to the Kingdom of Christ.

It is therefore incumbent upon older persons to encourage children to come to the Lord and to believe in His as Lord and Savior in simple faith. As we lead children in the ways of the Lord, they will grow in grace and in knowledge of our Lord and Savior Jesus Christ. My Pastor, Sonny Williams would commonly baptize children at early ages once they expressed the desire. These children had their preparation classes mainly in the home with the parents and maybe one or two with him. I do believe from observation that all of these children are still in the faith of Christ and this is truly a beautiful thing and a tremendous blessing for the stability of that child throughout life. I myself am a prime example of the blessings that come on a child who comes to faith early in life.

In my mind, there is nothing more beautiful than seeing a child grow up in the ways of the Lord. It is a great privilege and honor. We must not overlook the importance of the Sunday School as a place for leading them to the Lord. A few of my own Sunday School students, now adults today, were led to the Lord in Sunday School. I will tell you that a child may not understand the deep mysteries of the faith, but will readily understand symbolic things if they are taught in a simple manner. I was baptized at 10, after having given my heart to the Lord at 9. To me, this baptism meant that I was a Christian until I fully began to understand how to walk as a believer at age 11. Let us permit the little children to come to Jesus and forbid them not, for of such is the kingdom of heaven.

THE LAYING ON OF HANDS FOR TRANSFORMATION OF THE CHILD

Scriptures show that a marked change and anointing of power will come on your child after he or she receives an impartation from Holy men and women of God by the laying on of hands. After Prophet Samuel anointed David as successor to King Saul, the scriptures say that “the Spirit of the LORD came upon David from that day forward” (1 Samuel 16: 13).

A marked change took place in David, so that he became strong in spirit. Thereafter, people described 16 year old David as a person who was:

“cunning in playing, and a mighty valiant man, and a man of war, and prudent in matters, and a comely person, and the LORD is with him.”

This is something amazing and wonderful to say about a 16 year old. David was described by influential people as a skillful musician, a valiant man (spirit of power), a warrior, man of self control and a man who was favored by the Lord.

Do you want the Spirit of the Lord Jesus to come upon your children in all fullness, with the signs in Isaiah 11: 2-5 following them? Do you want your child to experience the outpouring spoken of by the Prophet Joel? The laying on of hands can fast track the Power and Christlikeness into your child when done by a Holy Man or Woman of God.

Jesus himself had hands laid on Him in His early life by Simeon, a man of God who was filled with the Holy Ghost. He took up the baby Jesus in his arms, blessed God and spoke words confirming that He was the Son of God. I myself have laid hands on pregnant women and prophesied about the unborn child, the Lord confirming His words as the child grew. This is a needed ministry in the church.

John the Baptist, Jesus, Samuel and others were filled with the Holy Spirit from the womb. What about your unborn child? Do you know the destiny of the child? The laying on of hands by holy men and women of God who are filled with the Holy Ghost is an excellent means of covering your child from the adversary and setting him or her into his destiny.

This is similar to the laying on of hands for the transformation of the child, but I would like to deal with it separately for emphasis. Paul’s example to Timothy points to the reason why parents brought children to Jesus for him to pray over and bless their children. In a way, Apostle Paul revealed what Jesus could have done when He laid hands on those children.

This is such an important strategy that Paul spoke of it to Timothy, not once or twice, but three times. He had become Timothy’s spiritual father and bishop and had imparted gifts to the young man while functioning in that role. Impartation of gifts by the laying on of hands is God’s strategy for continuity in the earth. I wonder if parents, Bishops, Pastors, Apostles etc, can see the importance of this strategy and how it expresses Christ’s love for the future generations? 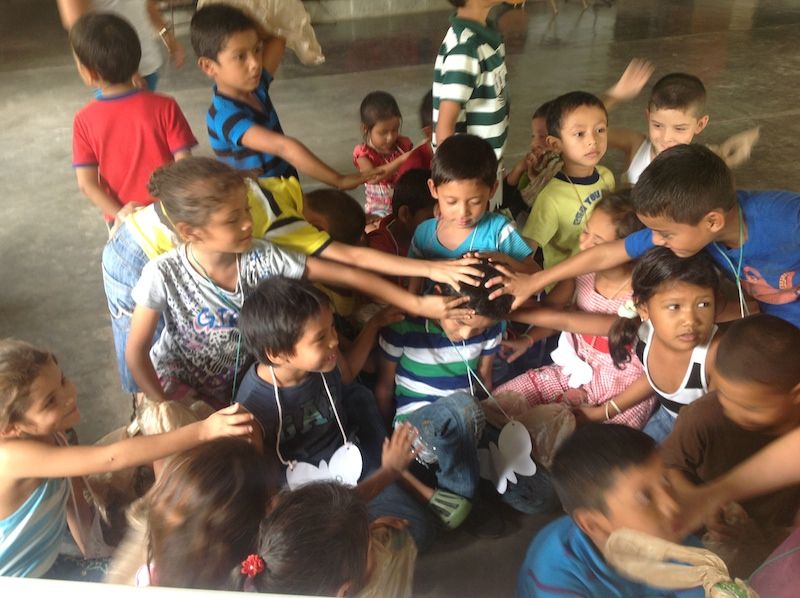 So returning to Apostle Paul, we discover that the Apostle referred the laying on of hands in 1 Timothy 1: 18 where he said:

“This charge I commit unto thee, son Timothy, according to the prophecies which went before on thee, that thou by them mightest war a good warfare” (1 Timothy 4: 12).

“neglect…the gift that is in thee, which was given thee by prophecy, with the laying on of the hands of the presbytery.”

Apostle Paul had become concerned that Timothy had not taken fulfilled the charge given to him in the prophecies. This concern reveals that a child’s destiny can be spoken over him or her and that the child can be like an arrow in the earth in the sense of being fully aware of and fulfilling a particular assignment given by God.

These prophecies had been spoken over Timothy by the presbytery or prophetic ministry team when they had laid hands on him. Acts 13: 1 revealed that one such prophetic presbytery team consisted of “certain prophets and teachers.” Everyone in leadership in the early church was full of faith and power, and these were men who were able to touch and hear from heaven.

I hope that you are transferring the word to your life as a parent or spiritual leader. Are you imparting gifts of the Spirit to your children, whether they are natural or spiritual? Are you constantly reminding them about the gifts and the need to use the gifts? Do they have opportunities to exercise the gifts or are they being turned away by unbelieving disciples? I cannot overstate the importance of the laying on of hands. I myself have laid hands on and prophesied destiny into many young people to the honor and glory of God. Where are we today? This word of the Lord is a now word, a word for us to follow through on.

I speak blessings and strength of spirit over you and your children today. God bless you.

I couldn’t resist this one…lol