About David the shepherd boy for preschoolers

David the shepherd boy is a story taken from the Bible, which is the Word of God. David was a real person who lived many, many years ago.
He lived in a country called Israel, and was born about 3195 years after the Creation.

David lived in a city called Bethlehem with his father and seven brothers. He was a shepherd. Shepherds were people who took care of sheep.

In this story, we are going to learn how a prophet called Samuel anointed David to become a King of Israel.

A description of Bethlemem, the hometown of David the shepherd boy

Up amongst the hills, perched like the nest of a bird on one of the long low ridges, lay the little town of Bethlehem. It was just a small town at the time of this story. There was nothing outstanding or famous about the city.

Bethlehem lay off the beaten track. Anyone who wanted to visit had to climb the long, winding road. That road began at the plain beneath and wound through olive groves and sheep fields. It then twisted up to the city gate. The road to Bethlehem was a steep, difficult road, and led to nowhere but to the little town itself.

Let’s meet David the shepherd boy, his father Jesse, and his brothers

David, the shepherd boy, spent his days watching his father’s flocks in the sheep fields. His father Jesse was one of the chief men of the town. David was the youngest of all his sons.

David had seven big brothers at home. Jesse was very pleased with them. They were tall, splendid young men and all of them did men’s work. They paid very little attention to David the youngest.

David was about sixteen years, and still only a small boy in their eyes. As far as they were concerned, he was mainly useful for looking after the sheep.

Althought no one thought much of David, they could all say that he did his work well. He was one of the most careful and watchful shepherds on all the hills around Bethlehem.

David the shepherd boy knew each one of his sheep, and never allowed one to stray. He always led them to the best pasture, and found the coolest and freshest water for them to drink.

David was as brave as a lion. If any wild beast came lurking round hoping to snatch a lamb away, David would get up at once and would attack the fiercest beast single-handed. Nothing could ever do any harm to his flock. 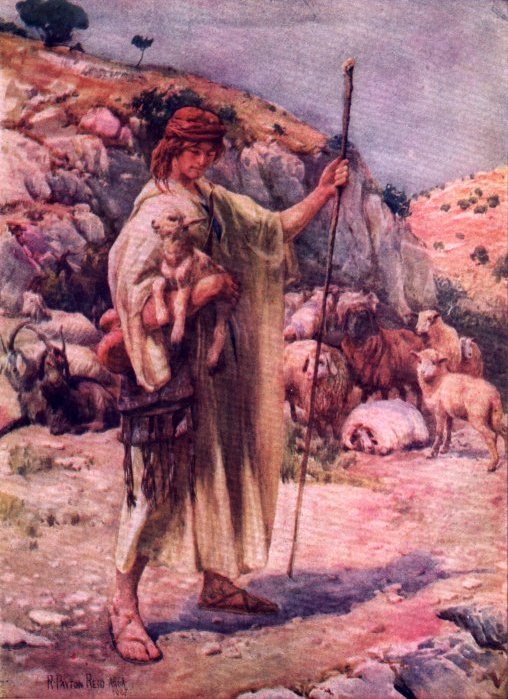 One day while David was, as usual, out in the fields, a sudden stir of excitement awoke in the little town of Bethlehem. Men gathered around the city gate. With anxious, fearful eyes they looked down the long white road that led up from the plain below.

There seemed nothing there to make them look so terrified and anxious. There was only an old man slowly climbing up towards the town. He was driving a heifer before him, and carrying what looked like a horn in his hand.

The people whispered together that the old man was none other than Samuel, the prophet of the Lord. He carried God’s messages. They wondered if he was bringing a message to them, and wondered if it was good or evil.

As they watched the old man approach their city, the people of Bethlehem wondered with uneasy minds if they had done anything wrong lately.

Prophet Samuel had come peaceably to Bethlehem, the hometown of David the shepherd boy

At last the chief men of the town went out to meet Samuel the Prophet.

“Have you come peaceably?” they asked anxiously.

The prophet Samuel lifted his head and looked at them kindly as he replied.

“Yes, I’ve come peaceably,” he answered at once; “I came to sacrifice unto the Lord.”

A great sigh of relief went up from the people. The visit was a mark of God’s favor and not of His displeasure.

God had sent the Prophet Samuel on a secret mission to anoint one of Jesse’s sons as king of Israel.

It was true, indeed, that Samuel had come to offer sacrifice. However, he had come also on a secret mission that only he knew about.

God had asked him to take his horn of oil and to anoint one of Jesse’s sons to be king over His people instead of Saul. Saul was the present king, and he had displeased God.

God had warned Samuel to secretly anoint the new king. King Saul was not to hear about it, or his vengeance would be swift.

Samuel placed Jesse’s sons in a lineup in order to choose the new king.

The feast of the sacrifice to God was prepared in Jesse’s house. Samuel asked for all of the sons of the house to pass by in front him as they went to attend the sacrifice.

The first to come was Eliab. He was Jesse’s eldest son. When Samuel saw him he felt sure that this was the man who was to be anointed as king.

Eliab was a splendid young man. He was tall, and strong, and handsome, and looked almost as kingly as Saul himself.

“Surely this is the king,” murmured Samuel to himself.

God’s answer came quickly, “no, Eliab is not the new king..”

Samuel saw only the outward signs of strength and beauty, but God saw deeper into the heart.

The eldest son passed by. Each of the six brothers followed one by one. Any father would be well pleased with sons like these. However, God did not permit Samuel to anoint any one of them as the new king of Israel.

Samuel asked Jesse to send to the fields to get David the shepherd boy.

Samuel was puzzled. What could it mean? He turned again to Jesse.

“Do you have any other children?” he asked.

Surprised at the question, Jesse suddenly remembered his youngest son, who was out in the fields caring for the sheep. Was it possible that Samuel had any use for him?

“Send and fetch him,” ordered Samuel instantly, “we will not sit down till he comes here.”

A messenger was hastily sent to bring David. The shepherd boy soon came hurrying in. As soon as Samuel saw him he knew that his search for the new king was over.

David was only a little shepherd boy. The breath of the hills was around him. He was sweating from the hot sun, and his sunburned hand held on to his shepherd’s crook. However, Samuel was absolutely sure that God had chosen him to be the new king. 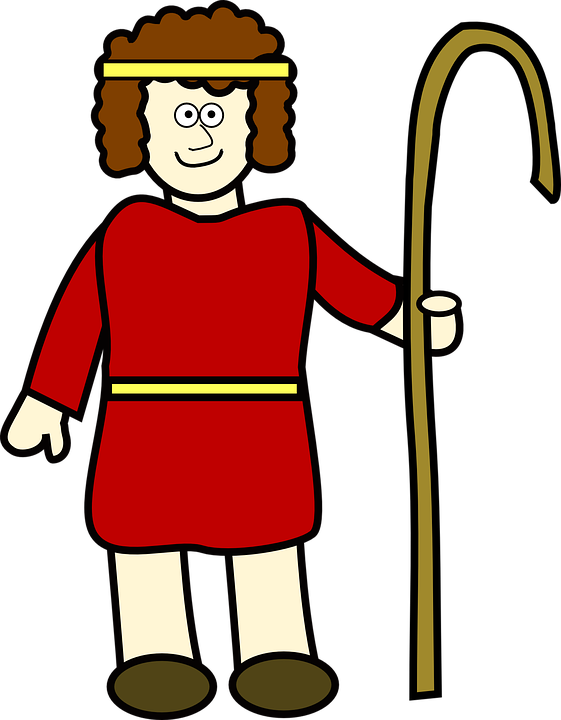 Samuel anointed David the shepherd boy to be the new king of Israel.

“Arise and anoint him, for this is the king,” said God’s voice in Samuel’s heart.

The old man rose and held the oil high. He poured it upon the boy’s bowed head, while the rest of the company looked silently on.

They were puzzled and wondered what it all meant. Perhaps the elder brothers were envious. Maybe they wondered why this child should be singled out for special favour. However, no one dared to question God’s messenger.

Nothing further happened. Samuel the prophet left Bethlehem, taking the winding white road. Before long, everyone forgot about his visit as the people settled to their work again.

David the shepherd boy was certain that God had anointed him for a special task.

Only David, out in the fields, thought more and more about what had happened. He became more and more convinced that Samuel had anointed him to do some special work for God. The wonder of it filled his mind, but it never interfered with his work.

There was little time for idle dreaming in the boy’s life. He was as watchful as ever in his care for his sheep. He remained as courageous as ever in guarding them against prowling beasts.

He kept himself busy even in his leisure time and did not waste any of the sunny hours of daylight.

David the shepherd boy loved music and taught himself to play the harp.

David loved music, and he taught himself to play on the harp. He practices=d so carefully and patiently that he became very skilled with his fingers.

He also wrote songs to go to the music. Some of them were the most beautiful songs that ever have been written in all the world. Almost every child knows his beautiful song about the Good Shepherd: “The Lord is my shepherd, I shall not want.” 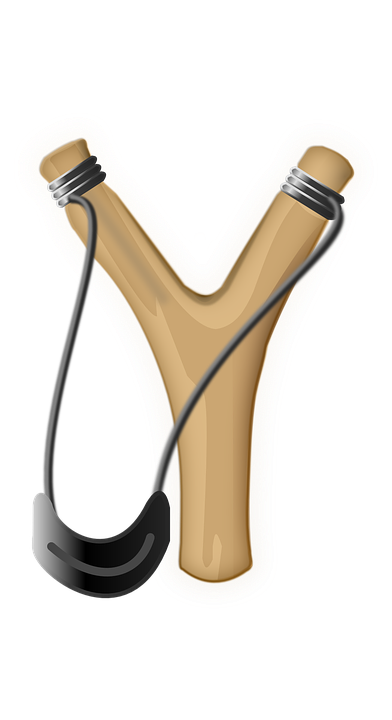 There was another thing, too, that David learned to do with the same care and patient perseverance. He taught himself how to use his shepherd’s sling. There was no boy in all Bethlehem who could shoot as straight as he could. He never missed his mark.

It was no great thing, perhaps, to make music and aim straight. However, the greatest thing was to do everything with all his might.

Perhaps some day God would make use of his singing. Maybe God might have some work for a boy who had a quick eye and a sure aim. Who could tell?

So David learned to do his very best, and before very long God’s call came to him.

Our upcoming story is about David and the Giant Goliath.